At the Installation Ceremony in January 1910, W.Bro. J.H. Hartley was installed in the Chair as W.M. he being the oldest P.M. of the Lodge, to celebrate the 50th Anniversary of the Lodge. At the May meeting, a letter from Mr R.B. Barrett, Agent a Skipton Castle, was received stating that Bro. Lord Hothfield had pleasure in placing the Baronial Hall and other rooms at the Castle at the Lodge’s disposal in which to celebrate the Jubilee of Craven Lodge. It was also announced that the Lodge had been honoured by the appointment of the Chaplain, Bro. Rev. Frederick W. Patten as Provincial Grand Chaplain.
Provincial Grand Lodge granted the Lodge a Dispensation to meet in the Baronial Hall, Skipton Castle and also to appear in Masonic Regalia in the Parish Church on 24th June, 1910. After the Service, the Brethren were re-conducted in procession to the Castle for the Lodge closure and were then photographed in the Castle grounds. 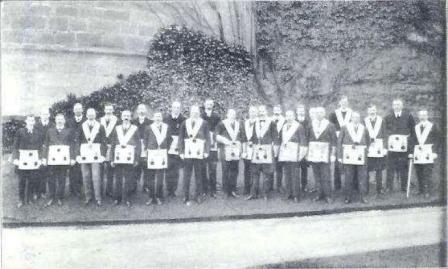 Many Lodges, including Craven, did not appoint a Director of Ceremonies in the 19th Century. Craven Lodge first appointed one in January 1907, but it was not until 1912 that Grand Lodge passed a Resolution that Rule 129 of the Book of Constitutions be altered to read as follows: “The regular Officers of a Lodge consist of the Master and his two Wardens, a Treasurer, a Secretary, two Deacons, an Inner Guard and Tyler. The Master may also appoint a Chaplain, a Director of Ceremonies, an Assistant Director of Ceremonies, an Almoner, an Organist, an Assistant Secretary and Stewards”.
Many worthy and distinguished Brethren over the years have served in the various Offices in Craven Lodge with faithfulness and distinction. The record for long service in any one Office goes surely to Bro. J.L. Kidd whose services as Secretary of the Lodge extended over a period of 34 years from 1897 to 1930, broken only by his occupation of the Master’s Chair (1909) and I.P.M. (1910). Bro Ascough Rodwell served as Organist for 16 years from 1910 to 1926. In more recent times W. Bro. E. Nelson was Treasurer of the Lodge for 23 years (1956-1978) and our loved and respected Grand Lodge Officer, W. Bro. J.H. Armistead was Lodge Secretary for 11 years between 1951 and 1964, broken by his occupation of the Chairs of S.W., W.M., and I.P.M. This in addition to his long and loyal services in Chapter and other Masonic Degrees.
There are glimpses in the Lodge Minutes from 1914 -1918 of the impact on the Craft in general and Craven Lodge in particular, of World War 1. It was reported at the Lodge Meeting in September 1914, that a telegram had been received from the Secretary of the Prince of Wales’ National Relief Fund, raised to alleviate the acute distress which must inevitably arise following the outbreak of War, and calling on Craven Lodge 810 for a donation. The Past Masters had met and had donated £10-10-0. Their action was submitted for confirmation and approved. Similarly on 27th November, 1914, it was proposed that £5-0-0 to H.R.H. Princess Mary’s Fund towards a Christmas Present to all our soldiers and sailors serving with the Expeditionary Forces on land and sea. This was carried unanimously. Again at the November meeting of the Lodge in 1915, in response to an appeal for food parcels from Masonic Brethren interned as prisoners of war in Germany, it was carried unanimously that £5-0-0 be sent.
It was approved at the December Lodge meeting 1915 that owing to war-time restrictions, no Banquet be held after the installation but refreshment be provided in the Lodge Rooms. It is also recorded that at the Installation Ceremony on 28th January 1916, the master-elect being on Active Service, the W.M. W.Bro. C.K. Butchart having occupied the the Chair for the previous year, it was not necessary to install him again. The Installation Hymn was sung and the W.M. saluted in the three degrees.
Applicants for entry into Masonry were sparse during the War years, but on 28th September, 1917 four applicants were balloted for separately. Three of these were successful, including the late Dr Norman Alexander McLeod, revered in memory not only by Craven Lodge but the whole of Skipton and Craven district.
On the 28th December, 1917, it was resolved that the greatest sympathy and condolence of the Lodge be recorded in the Minutes to the five Lodge Members each of whom had sustained the loss of a son in this Great War, viz. W.Bro. J. H. Hartley, W. Bro. M.R. Knowles, W.Bro. Mackay, Bro. Ascough Rodwell and Bro. Derry.
Finally to complete the History of the War Years, it is fitting to recall that early in 1920 United Grand Lodge inaugurated a ‘Million Fund’ to commemorate the Brethren who had fallen in the Great War 1914-1918, by erecting a large Masonic Hall in London. Our Freemasons Hall is the result of that appeal and is a worthy and noble remembrance.
It had long been felt by the Barnoldswick members of the lodge that there was an urgent need for the formation of a new Lodge at Barnoldswick. Craven Lodge offered its full support and at the Lodge Meeting on 26th December, 1919, Bro. R.S. Windle presented to the W.M. The Petition of the Barnoldswick Brethren for the formation of a new Lodge at Barnoldswick to be known as Faith, Hope and Charity Lodge. The Petition was duly signed by the W.M. of Craven Lodge and his two Wardens and presented to the Deputy Prov. Grand Master. In March 1920, a Charter was granted by Grand Lodge for a new Lodge at Barnoldswick designated Faith, Hope and Charity No 4102 on the Register of the Grand Lodge of England. So our second daughter Lodge was born and thrived over the years with strong ties of friendship and fraternity with the mother Lodge and sister Lodge of Castleberg 2091.