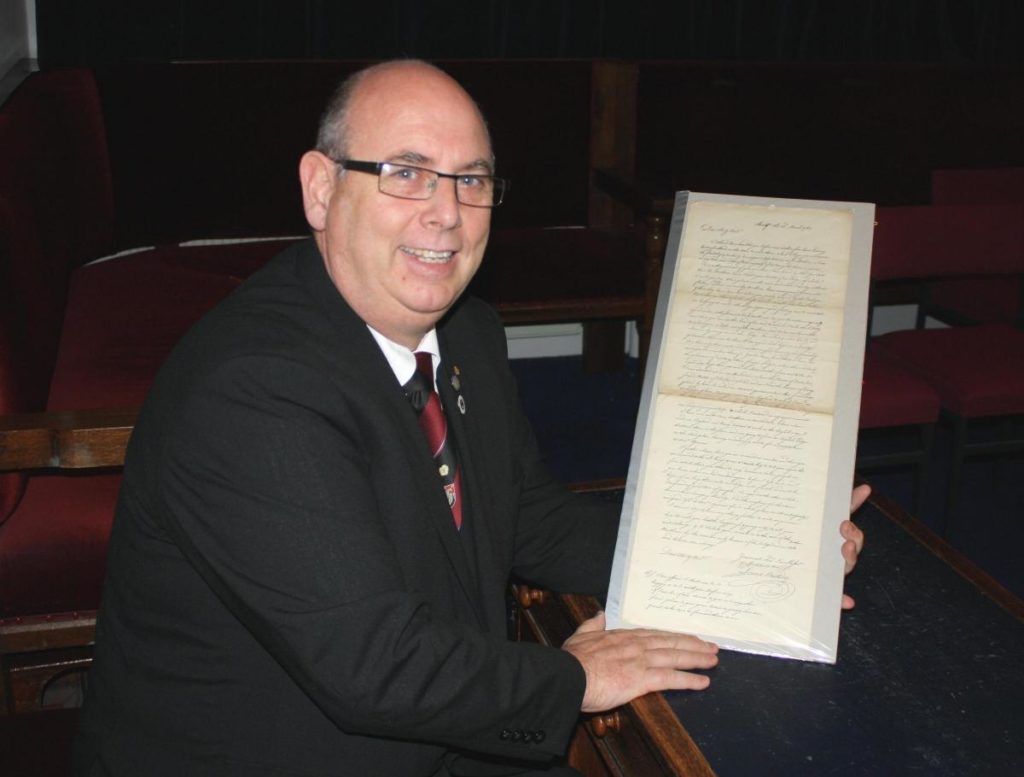 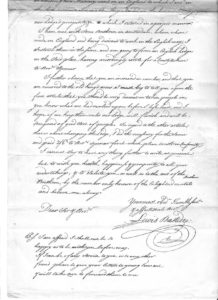 A LETTER written more than 250 years ago in Amsterdam, congratulating the new master of a Leeds Masonic Lodge, has been discovered amongst the pages of a book in Skipton.
In the two-page letter penned in 1762, Lewis Bastide, a member of Golden Lion Lodge, also speaks of his experience with foreign lodges in the Dutch capital, and his intention to form an English lodge in Amsterdam.
The correspondence was unearthed by Chris Hill, secretary of Craven Lodge, during an audit of historical books and documents, where it was found in an envelope tucked into an old copy of a Book of Constitutions.
From records held at The Library and Museum of Freemasonry in London, The Golden Lion Lodge was warranted by the premier Grand Lodge of England on January 8, 1761, and numbered 258 on the Roll of Lodges, and initially called “A Masters Lodge”.
The Warrant for Lodge No 258 was issued by Lord Aberdour, Grand Master, and appointed Sir Henry Ibbetson to be Master, Lewis Bastide to be Senior Warden and George Lawman to be Junior Warden.
During the Jacobite Rebellion of 1745, Sir Henry raised a corps of 100 men at his own expense and, in recompense for his loyalty, was created a Baronet.
Lewis Bastide was a prominent merchant in Leeds whilst George Lawman was a master Surgeon in the Army.
The lodge met at various taverns in Leeds including, from 1766, the Golden Lion, Briggate, from which the Lodge took its name in 1772.
However, it ceased to meet regularly from December 1780, and was erased on February 1, 1786.
The only information available about the Lodge’s members is a list of names which appears in a volume entitled List of Members 1770.
Chris Hill, Secretary of Craven Lodge, which meets at The Masonic Hall, Sackville Street in Skipton, said: “This wonderful letter was found totally by accident when I was conducting an audit of lodge possessions.
“It was in a plain envelope and fell out of the pages of an old Book of Constitutions. Despite it being there for goodness knows how long, the letter is in remarkably good condition, and is now carefully preserved,” he said.
“The contents of the letter are fascinating and give an insight into Freemasonry in Leeds and Amsterdam more than 250 years ago. It’s just a shame the name of the Master Lewis Bastide was writing to congratulate is not known.”
In the letter, Lewis Bastide, writes: “It is with great deal of pleasure that I have heard by Brother Geo. Scott that the Brethren have elected you Master of our Lodge, of which I wish you joy. What pleases me the most and what I can say without flattery is to see that our worthy Brethren have recompensed your merits, and that they have done but what you justly deserv’d by the zeal you have always shew’d for the Craft, and the trouble you have taken in helping to make the Lodge upon a good footing and to maintain a good order in the same, which I doubt not but you’ll continue, especially now that you are at the head of it, and to which I take the liberty to exhort you and the rest of the Brethren , and to see our laws well observed by everyone in the Lodge.”